Visit us in
Northport Village! 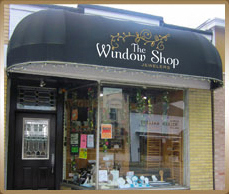 < Back to News Menu

Downtown Shop is True to Its Name

The Window Shop Jewelers is well-established now but has humble beginnings.

Everybody in Northport Village knows the Window Shop Jewelers. They’re a landmark downtown, and they regularly contribute to charitable events.

But not many know the history behind this Town of Huntington gem.

Owner Jean McNeill and life partner Joseph Pidal started their story by buying a cottage in Centerport. To supplement her income at a Manhattan wholesale showroom and help pay the bills, they began selling odds and ends at area flea markets.

What began as the couple selling custom creations made from cheap Indian jewelry eventually turned into a company. McNeill merged sterling silver, liquid silver, beads and other components into jewelry on their kitchen table while Pidal handled the sales.

In the winter of 1976, they decided to rent window space in a Laundromat, now home of Organically Yours, to profit from holiday sales.

“It was his idea we open a store for the Christmas season for three months and make a lot of money,” McNeill said.

The space was cramped; customers were forced to look at jewelry through the window and squeezed inside to the narrow counter for transactions. The couple even wedged a workbench by the window to handle repairs.

But after the three months they initially planned for came and went, McNeill and Pidal hung around for another three months. Then, they moved across the road to the second floor of 75 Main Street. It lacked the front window, but now they had a full store to sell their wares. The couple moved back across the street after 14 years in 1990, arriving at their current location.

The business has significantly changed over the years. While they initially carried Native American jewelry, a personal favorite of McNeill’s, they stopped carrying any as the price of metals forced Native Americans to stop making it.

“It’s a shame. To me, that’s always been one of the true American art forms,” she said.

Slowly but surely, other metals and materials appeared in their wares. These days, the Window Shop carries everything from sterling silver to platinum, although they offer more sterling silver and 14-karat gold than anything else. It’s possible to drop thousands and thousands on a single piece of jewelry, but it’s also possible for a child to buy his or her mom a pair of sterling silver earrings for $10.

The Window Shop carries a few each of a wide variety of pieces, and that’s no accident. McNeill said she does more business with smaller manufacturers than the bigger names.

“It makes me a little more individual. You’re not going to walk into six stores around here and find the same thing,” the owner said. “I can call any of the big guys in the city and get what I need due to my name and business, but I’d rather go with the smaller guys.”

“I love that line and I love the people,” McNeill said of the latter. “Everybody loves their pieces.”

The owner attributed much of the store’s success to her support staff – the business’ employees. In addition to herself, McNeill employs two full-time workers and as many as seven part-time workers.

“I can’t say enough good things about my crew,” the owner gushed.

“It’s like a family. They’re not just my staff; they’re a team. They cover for each other. It’s a team, and it works beautifully. I get compliments all the time about the people that work there.” McNeill said.

Fortunately for her employees and customers, the Window Shop doesn’t appear to be giving up its window sill any time soon. Despite the poor economy and rising metal prices, McNeill felt she’s been able to survive.

‘If I’ve made it past the last couple of years, I don’t think I’m going anywhere. The past couple of years have been very, very hard for everybody. I’ve been able to pay my bills, pay my team, put a roof over my head and feed the pets. We’ve come this far and I don’t see why we can’t keep going,” she said.

A significant part of her previous success, the owner added, was due to the community’s support. They’ve rallied around her at times during her 35 years in business, especially when Pidal died in 2007.

This kindness has prompted her to return the favor many times. The Window Shop is regularly connected to local charities, fundraisers and benefits.

“If it weren’t for the support of this community, I wouldn’t be here. When they come in about a fundraiser, I do what I can,” McNeill said.